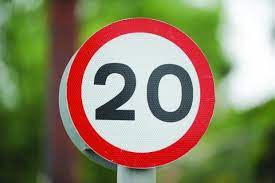 On 19 October Oxfordshire County Council’s Cabinet voted to endorse proposals to make it simpler, quicker and less cost prohibitive to lower speeds to 20mph on most urban areas and village streets in places where it is both suitable and supported by residents. The policy has been widely welcomed by campaign groups, parishes, and residents.

Councillor Tim Bearder, Oxfordshire County Council’s Cabinet Member for Highways Management, said: “There is a huge appetite for this 20mph policy and new approach around the county as towns, villages and parishes look to make their roads more pleasant and safer for pedestrians and cyclists. We are certain that it will save lives.”

“Drivers have a responsibility to adhere to speed limits – whether that is 20mph or 30pmph. If they don’t, then they are breaking the law. We are expecting the new approach to have a positive impact on road safety. I believe it will become socially unacceptable to exceed 20mph in a built-up area, just as it is to smoke on a bus.”

Matthew Barber, Police and Crime Commissioner for Thames Valley, said: “Speeding is a concern raised by many communities across Oxfordshire, and indeed across Thames Valley. The setting of speed limits is a matter for local authorities and Thames Valley Police will continue to enforce in line with the speed limits that are in force.”

Final details of updated Stonesfield signage are being established and the work to make the changeover will take place in early 2022.