Rowan Rheingans (of Lady Maisery/The Rheingans Sisters) will be appearing in a one-woman storytelling music show at the Northwall Theatre in Oxford on Friday 13th March. Having seen Rowan perform in her other groups, I would warmly recommend going to see her. The Northwall Theatre’s information tells us: ‘Dispatches on the Red Dress is an intimate and courageous new show by twice BBC Radio 2 Folk Award-winning songwriter Rowan Rheingans. Adventurous new writing meets the warmth of a folk gig in this heartfelt and personal one-woman show, uniquely weaving immersive storytelling with live fiddle, banjo and original songs taken from Rowan’s brand new genre-melding debut solo album The Lines We Draw Together. Unravelling the joy and pain from a story of her grandmother’s youth in 1940’s Germany, Rowan celebrates small acts of resistance and boldly asks a troubling question for our times: can hope for our future be found in the very darkest pockets of our history?’ https://www.thenorthwall.com/whats-on/dispatches-on-the-red-dress/

Folk Weekend Oxford returns after a year off, with many exciting events taking place in Oxford from 17th-19th April. On the Saturday, local fiddle/guitar duo Henderson:Hooper (that’s Nick and Judith) will be playing in Blackwells (2.30pm) and Stonesfield/Finstock trio The Boot Band (Susanna Starling, Nick and Judith) will be performing in the Ashmolean (11.45am). Just turn up and listen! http://www.folkweekendoxford.co.uk/all-free-events.html 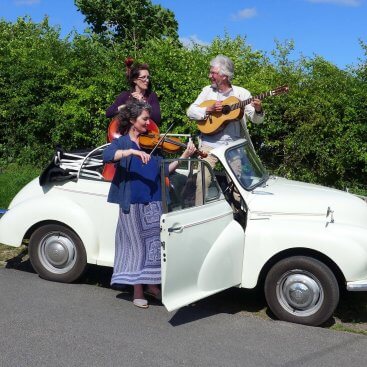 The Boot Band are very excited to announce that we will be performing at Wilderness Festival in Cornbury Park on Friday 30th July! https://www.wildernessfestival.com/programme/the-boot-band/